We use the SZapp app to distribute important reminders, messages and notes to families quickly. SZapp also contains the school calendar as well as forms for absentee notes and permission slips. Download SZapp to your phone to keep up to date on a daily basis in the form of alerts or email communication.

This newsletter service
is provided by:

The second Sunday of Advent is focused on PEACE.

As Catholics we tend to think about acting for peace, i.e. to bring about peace we need to work for justice. Our work in collecting food and goods for St Vincent De Paul Society to distribute this Christmas is a a small example of supporting those who are disadvantaged through injustice. Supporting the inclusion of those with disabilities is important in helping us dismantle societal practices that create injustices for some of its members. Being an active advocate for the humane treatment of refugee and migrant people who are simply escaping the injustices and dangers of their land of origin is another way we work to bring peace in our world. Action can create peace.

Buddhists would suggest that the only way we are going to be able to create peace in the world is if we first create (or better, find) peace in our hearts, i.e. if you want peace, be peace. It is through practices such as mindfulness and meditation that we deepen our awareness and build our capacity to be present to those around us, to understand their needs and to then respond with compassion. Through this deeper presence to our day we bring peace to each person, event and feeling we experience.

In my view it is through both action and contemplation that we can be peacemakers. First bringing peace to ourselves and then, from this place of deep awareness, sharing and creating peace with others.

December is always a very busy time. It is hard to find peace. This week I encourage you to find small moments each day to bring calmness and presence, to bring peace to yourself. In doing so you will find that you create greater peace for those around you that you love and that may need it.

Please note that the last day of school for 2019 is Thursday 19 December.

For those requiring care for their child on Friday 20 December, Camp Australia have places available.

The teachers in each year level will be announced in next week's newsletter. Students will be told their classes the following week and have a 'one-up' afternoon on Tuesday 17 December.

Class lists are almost finalised. We have begun helping some of our students with transitioning to their new year level by taking them for walks and visiting their classrooms or even giving them an opportunity to play in new areas of the school.

Thank you everyone for all of the St Vincent De Paul donations that have been provided so far. We will make a fantastic difference to many families this Christmas. Keep it up!

The Community Council met on Wednesday evening for the last time this year. Among our usual topics of conversation we met to discuss the draft school budget and to ratify the proposed school fees for next year. We will send home information next week outlining the school fees and any changes.

I would like to thank Kerrie Politi, Victoria Scarano and Jack Gibson for their time on the Community Council as they step down from their positions. Thank you for the wisdom, compassion, optimism and care for our students and families that they have shared in our important conversations.

The AGM for the Community Council will be held early next year and nominations for any available positions will be sought prior to this.

Just a reminder that:

Look to our school calendar on our website and app for more information.

Have a lovely weekend.

Each grade has been investigating a different aspect of Advent. At this time of year when things get very busy, the staff and I wanted to ensure that we took the time to focus on the Advent season. Year One are investigating Advent Calendars. Each day they open an envelope and a small card that has a few words on it. Then they read scripture or a story and discuss. Their teacher has expressed great joy at the deep and rich conversations that are being had.

Joy is one of the things we focus on during Advent.  Sometimes joy comes from unexpected places.  As a teacher it definitely does. So in the next few weeks, focus on the joy!

The Shepherds and the Angels

8 In that region there were shepherds living in the fields, keeping watch over their flock by night. 9 Then an angel of the Lord stood before them, and the glory of the Lord shone around them, and they were terrified. 10 But the angel said to them, ‘Do not be afraid; for see—I am bringing you good news of great joy for all the people: 11 to you is born this day in the city of David a Saviour, who is the Messiah,[a] the Lord. 12 This will be a sign for you: you will find a child wrapped in bands of cloth and lying in a manger.’ 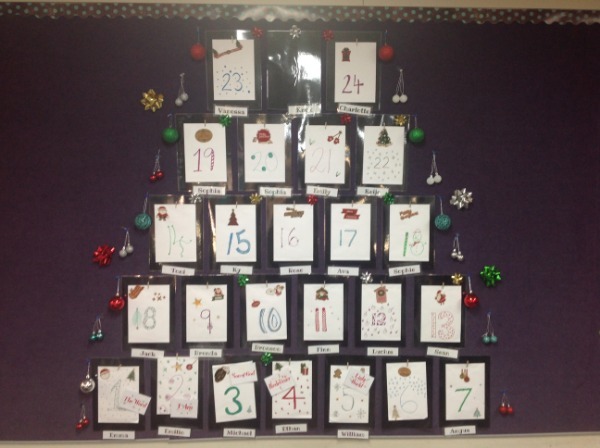 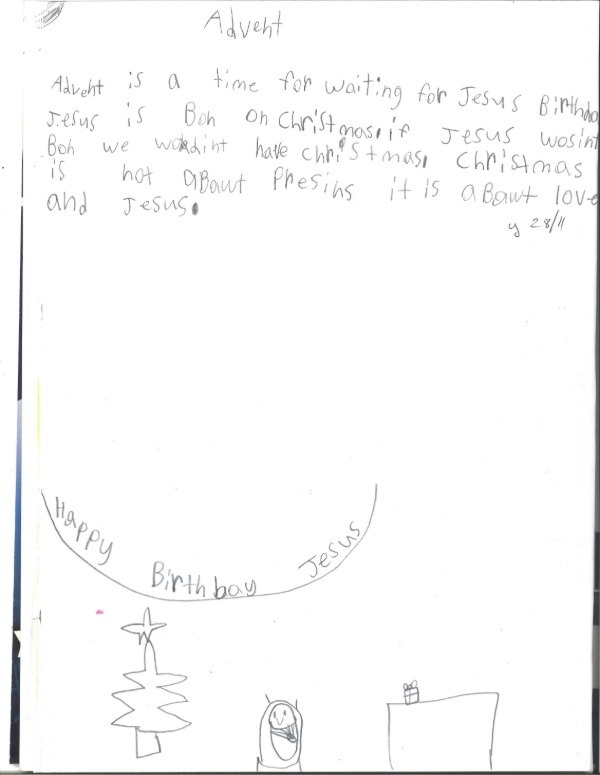 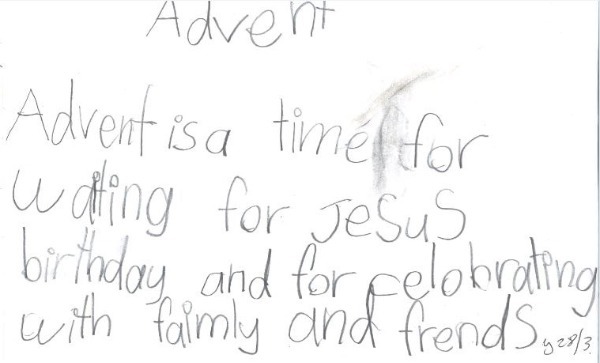 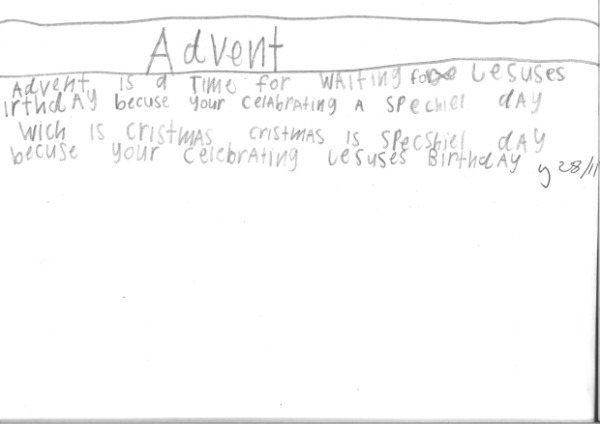 Congratulations to the following students who received an award for the fortnightly Positive Behaviour Focus ''we are on time". The awards will be presented at the School Assembly on Monday 9 December at 2:15pm.

Please note that Tuesday 10th December will be the last day of school banking for 2019. 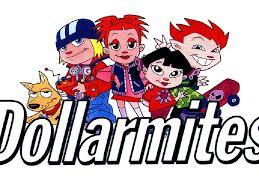 When a child loses a pet

New Zealand singing sensation Lorde created a social media frenzy recently when she announced that she’s putting her new recording on hold while she deals with the death of her dog.

The immediate reaction of this writer was not supportive. I shared a link to an article in UK newspaper The Independent titled “Lorde delays new album release after death of dog”  and commented “Sorry, is it just me or can others see a problem with this? 7.6 million followers (presumably mostly young) are influenced by her. A little more resilience may be in order. Am I being too harsh?”

Presumably yes, if the majority of the replies I received were an accurate indicator of the general public’s opinion. This reply from a lady named Sarah got me thinking, “…is she saying that it’s ok to grieve……?” A great reminder that as humans become closer to their pets we also need to grant ourselves permission to grieve when they pass away – especially children and young people.

Children’s pets come in all shapes, sizes and types. Whether it’s a goldfish in a bowl, the family pooch or a horse kept in a nearby paddock, kids grow attached to their pets.

When I was 11 I bought a guinea pig at my school’s fete. I was excited as this was the first pet that I’d owned. With my father’s help I built an enclosure in our back yard. I cared for my new furry friend with great earnestness– feeding it daily, cleaning its enclosure each weekend and letting it wander free range every now and again.

Unfortunately, a friend’s dog clawed its way into the enclosure and killed my guinea pig. It was my first close-up experience of death. I moped around for days, thinking that I’d never recover. Fortunately, my mother allowed me to be sad rather than insist that I get over it. Her patience was a blessing.

Keeping pets teaches kids so much about living a fruitful life, including caring for others, taking responsibility and being organised. However the biggest lesson for kids about the whole pet-keeping caper is that nothing in life is permanent. Even good things come to an end. There is a transience to life that can be both wonderful and hurtful. The passing of a loved pet can teach kids to value what they have rather than wish it away when the going (feeding, caring, cleaning the pen) gets tough.

The lesson of loss is a harsh but important one for kids though it can be difficult for a child to absorb at the time when a cherished pet passes. It can feel like nothing will ever be the same. But kids move on. They learn that these difficult feelings pass over time, which is a vital resilience lesson to absorb.

The attitude of parents when kids experience loss influences how they cope. My mother intuitively knew that she needed to give me time and space for my hurt to heal. Her empathetic response gave me the permission I needed to grieve and be genuinely sad about my loss. The fact that I remember this incident and her response after many decades shows the impact of both the event and her response.

Giving permission to experience feelings is particularly important for boys who’ve been conditioned for centuries to bury their sadness rather than recognise it, feel comfortable with it and carry it with them. When sadness is denied it almost always shows itself as anger – it’s got to come out somewhere.

There’s a lesson to be learned from Lorde’s response to her dog’s death. Putting an important recording on hold (which would impact many people including those whose income relies on her) may be an extreme response, but grieving is a process that takes time, requires mental space and needs others to make allowances for personal struggles.

Looking for a fantastic secret Santa or Christmas present?

Or just sick of trying to get or put back a token locked trolley?
We still have Metal trolley keys available for purchase for only $8

But be quick as there is only 10 left!

Any questions please email our fundraising coordinator Belinda at belinda.duke@hotmail.com.au