We use the Compass app to distribute important reminders, messages and notes to families quickly. Compass also contains the school calendar as well as forms for absentee notes and permission slips. Download Compass to keep up to date on a daily basis in the form of alerts or email communication.

Term 4
Please remember that the term dates are different across the ACT this year.  Term 4 is 11 weeks long.

Please go to our school calendar on the website or SZapp for more details. 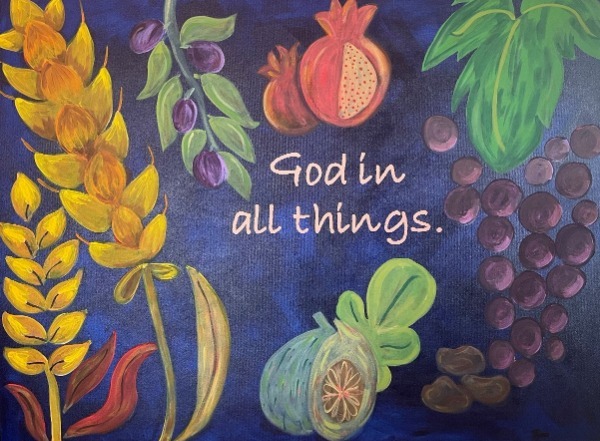 The school positive behaviour focus during Week 8 was:

Spring is here and the sunny weather coudn't be more perfectly timed! It's been a much needed boost for everyone. With the changes to outdoor activity restrictions I hope you all get to enjoy more time together outside this weekend.

Happy Father's Day to all of our dads in the community. Sometimes we over complicate the role of 'being a Dad' in today's world. We talk about changing stereotypes, taking on the role of primary caring, diversity of experiences, challenging bias. These are all ideas that I will passionately talk about with anyone. But as a father of nearly all adult children I've had some time to think more about this.

In the end, being a good Dad simply comes down to love. Children know their Dad loves them and that is what they want the most. Of course they will remember fun experiences, serious talks, shared interests and firm guidance and yet it's knowing and feeling that their Dad loves them that they will always remember. We might all be different as Dads but we all have that common experience of loving our kids.

I hope that our Dad's feel the return of that love on Sunday and that they know just how much their children notice that they love them. 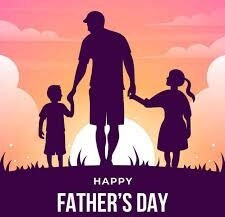 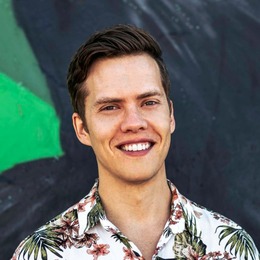 I'm excited to share that this Wednesday we have an online magic show with Michael Webber.

Michael performed for our students at the end of last year and as a treat and a break from all of our online class and group meetings we have hired Michael to run three 30 minute magic shows for our students.

It will be a lot of fun and I'm looking forward to enjoying these with the students.

More information on how to access the shows will be shared early next week.

Our entire Catholic Education system is moving to a new app/web portal called COMPASS beginning next term. It will make communication and information access between home and school much, much smoother.

On Monday you will receive information via Schoolzine about how this will be rolled out prior to the start of term. Below is an outline of what you as parents will be able to use COMPASS for.

I'm listening to The Resilience Project by Hugh van Cuylenberg on Audible. He talks about three practices that have been shown to significantly improve resilience and mental health: Gratefulness, Empathy and Mindfulness (G.E.M.).

As you read this newsletter i give you permission to stop and pause. Sit or stand in that one spot and look and listen to the all that is immediately around you. Ask yourself 'How good is this?' Notice what you feel thankful for and say to yourself, to God or to whomever...thank you.

Tonight, help your child do the same.

You've just built up even more resilience and positive mental health in yourself and your children. Well done.

As we were unable to run Learning Journey's in Week 6, we have made the Hamper Raffle available online. You can purchase tickets on the Qkr app under Community Council Events/Fundraising. If we return back to school at the beginning of Term 2 we will draw the hamper raffle then. If not, we will work out an online way of drawing the raffle.

It has been a little tricky to fundraise for the Community Council, so if you are able to, it would be fantastic if you could support this fundraising activity.

If you can't make a decision on which hamper to choose, then the "All Hampers" ticket is the one for you. Purchase one ticket for $10 and you will get one ticket in each hamper.

The price of tickets are as follows:

The following hampers are available: 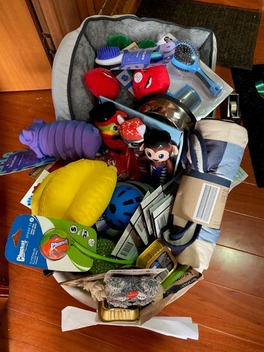 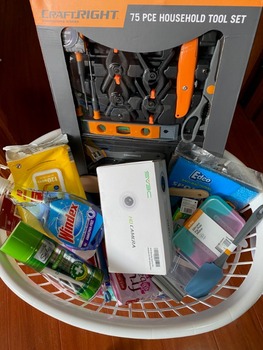 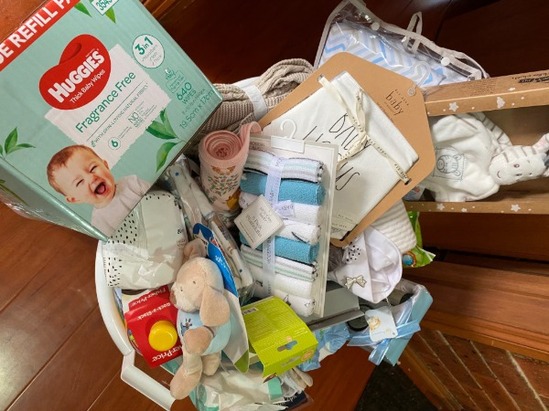 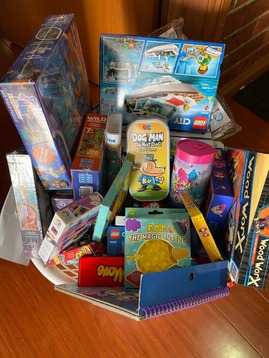 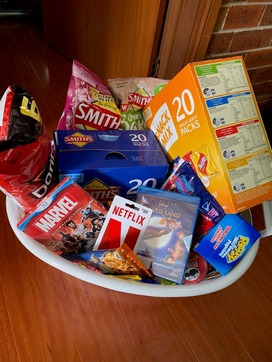 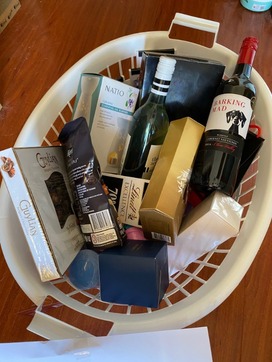 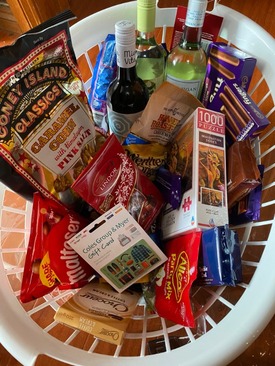 As REC I want students and families to feel connected to their faith. When we are at school there are lots of ways we do this. As a whole school we pray together everyday and so do the staff. Each classroom has a prayer table with special objects and liturgical cloths. The Sacred Heart of Jesus is evident in the corridors and classrooms.  We gather for liturgies.

When we are apart, it is a bit more challenging to be connected to our faith.

It has gladdened my heart this week to get several emails from students and staff sharing how children are expressing their faith at home.  This week I would like to highlight some of those students.

Leo from Grade Two had this great response in relation to the book shared last week 'Norton and the Bear'.

The questions we wanted students to think about were: 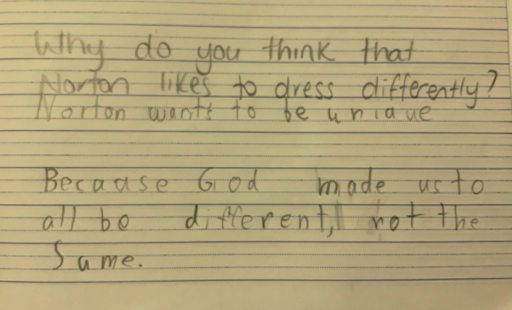 Emma T from Grade 6 chose this part out of the Psalm 148 to draw my representation of it: 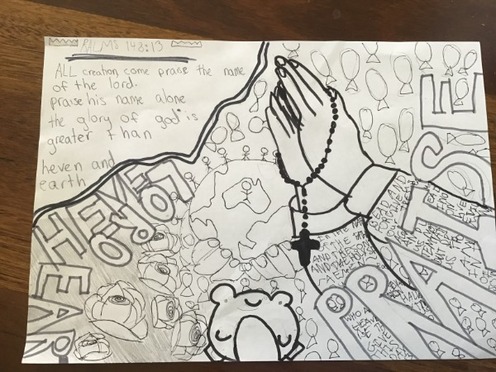 the name of the Lord.

The glory of God is greater

than heaven and earth.

My main focus on my artwork was all the things God created.

Uasi in Year 4 Shared his response to Psalm 148. 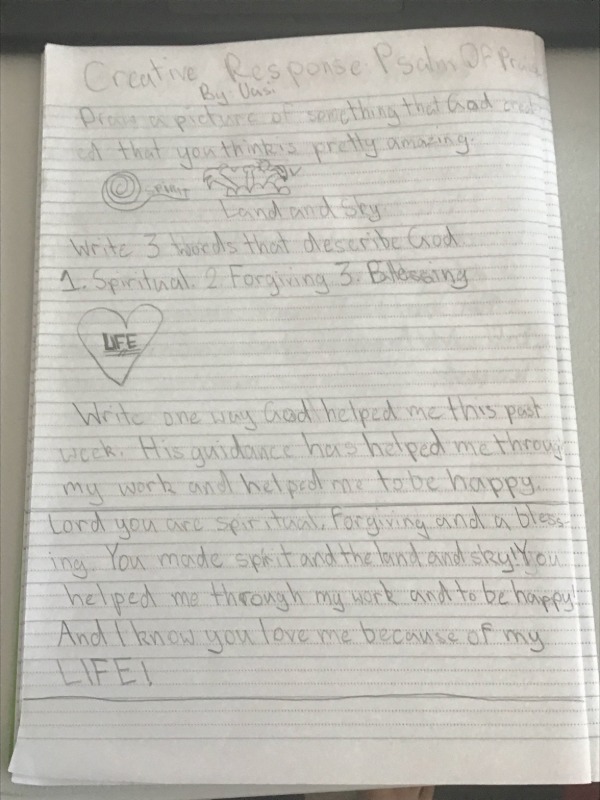 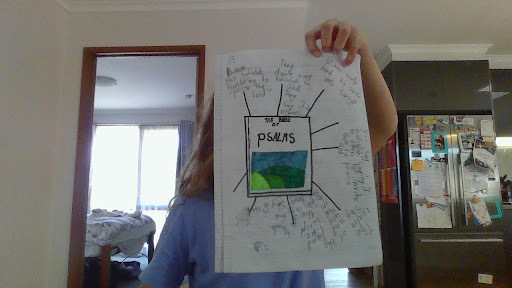 Year 3 were looking at the Last Supper and created their own versions. 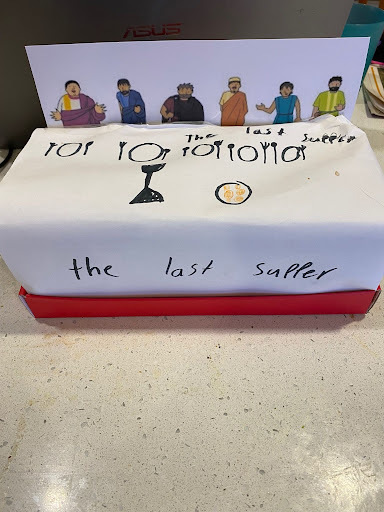 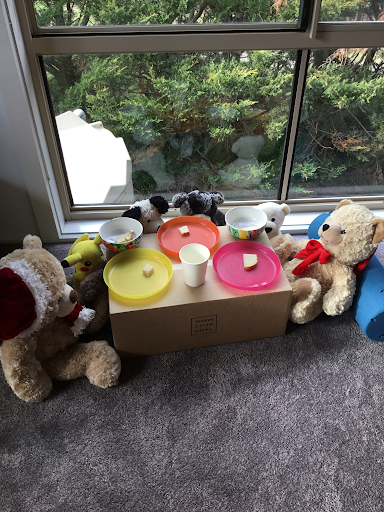 Click on this link to find out how you can join in.

Happy birthday to Cassidy S, Ethan B, Francesca M, Jessie A, Fiesita M, Viliamia and Jessica C who all celebrated a birthday over the last week.

In praise of fathers: the place of the modern dad

Fatherhood has been transformed from the breadwinner and disciplinarian role of the past to a far more complex framework. Here’s how:

A look at different cultures even within our shores shows there’s no one ‘right way’ to be a dad. Fathers have a strong biological urge to ensure their children’s survival, which drives dads to be protective, some to have high expectations and others to promote self-sufficiency. Fathers may differ in how they parent, but ultimately, we all belong to the same valued club. Fathers almost universally want what’s best for their child.

Being a dad is not given the same attention as motherhood. The parenting advice industry is often skewed toward mothers as the direct or primary carers. The lack of recognition can also at times be seen in the mental health field. It’s now recognised that men experience heightened anxiety at all stages of fatherhood, however, most simply suffer in silence because ‘that’s what men do.’ The recent advances in mental health promotion still have some way to go when it comes to fathers.

Fathers have long been seen as the kings of play. Science now shows that play is a critical part of the fathering toolkit. Whether it’s engaging in rough and tumble play with toddlers, sharing pizza night with primary-school kids or laughing with teens over the latest cat video, dads bond best with their children through play. Oxytocin, the bonding chemical that promotes strong relationships is released most intensely for men when playing with kids. On the other hand, oxytocin spikes for women are prompted by affectionate activities such as stroking, cuddling and talking softly to kids. Activity is at the heart of effective fathering as it’s through play that many men do their best fathering work.

‘I wish my partner raised children like me’ is a common parent comment. While usually uttered out of sheer frustration this comment misses the point that evolution dislikes duplication. Put simply, if one parent is the disciplinarian the family doesn’t need another. Better for the other parent to focus on nurturing, teaching or arranging daily timetables. In busy families it’s better to ensure all the parenting bases are covered rather than duplicating roles and leaving out important functions. Working together as one part of team will ensure that most of the needs of a child are met. Alternatively, if you are parenting a child on your own stay connected with other families and reach out for assistance when required.

The school of dad

Traditionally, fathers have been heavily linked with children’s learning, but not necessarily of an academic kind. The reinforcement of values, real-world problem-solving and teaching for self-sufficiency have been the usual domain of dads. Recent studies show that dads can also positively impact their children’s academic achievement, but in different ways to mothers. While mothers are more likely to be involved in at home learning activities such as hearing children read and supervising homework, fathers are more likely to positively impact their children’s attitude to learning. According to American educational researcher William Jeynes, dads focus more (than mothers) on moulding and modelling correct mindsets and behaviours, which provide the foundation upon which children and teens can build their academic journeys. It’s this bigger picture focus where fathers can do their best work, particularly changing boys’ attitudes to women and giving their daughters the confidence to stand up and be heard.

If a father wants to positively influence children and teenagers, it’s important to ensure that their relationship is warm and supportive. While this may be at odds with men’s natural tendency to push children’s developmental boundaries, fathers should lean on their well defined ability to relate to their kids through play. As Australian educational leader Dr. Tim Hawkes noted in his book “Ten conversations you should have with your son” dads who engage in banter and fun are better placed to discuss issues of real substance with their children.

Fathers who promote children’s self-sufficiency are well placed to develop resilience in their children. In fact, a key role for modern fathers is to ensure, as part of team parent, that their children can confront and overcome the hardships, frustrations and difficulties that life throws at them. This is done less by adopting tough, hard-nosed tactics, and instead allowing kids to take physical and emotional risks in the knowledge that they can return to a warm and secure base.

Dad is a social role

With children growing up in step, adaptive, single parent and same sex families fatherhood has become less a biological and more a social role. As society changes and assisted parenting techniques continue to advance, whoever answers to father takes on importance in a child’s life. This is not denying the rights of a biological father, but rather acknowledges that for many children the person who shows up whether stepfather, relative or family friend, or even a single parent doing both roles, is the social father for a child.

As society changes the role of fathers is also shifting as well. While the place of a father in a child’s life has always been important, there’s never been a greater need for fathers to be supported in their role and to widen our view of what it is to be a dad.